NGSS as a Hallmark Innovation in Science Instruction 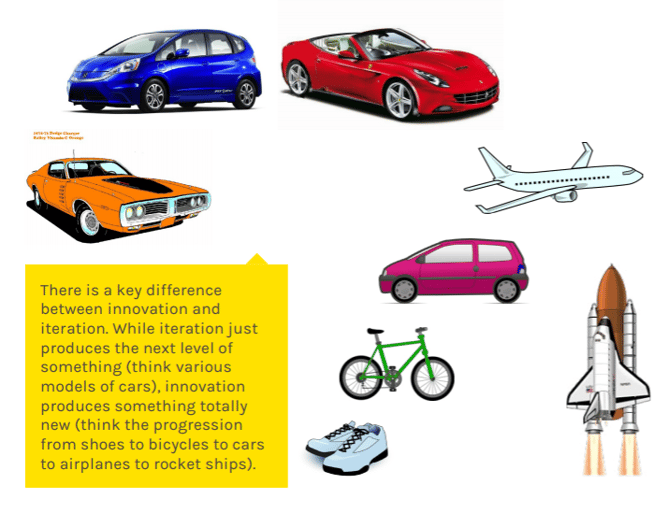 It is crucial to understand that the NGSS represent a true innovation in science standards. Innovations aren’t iterations; they don’t simply make an existing model a little better. These innovations change science teaching and learning.

Consider the invention of shoes, which help us run faster and further than walking barefoot. The invention of the bike was an innovation that improved transportation by 5 to 10 times the speed that shoes could offer. Then along came cars, airplanes and rockets … who knows what’s next? The point is that you must think of the Next Generation Science Standards as a development on the order of the transition from car to airplane.

That means you can’t expect curriculum changes that amount to no more than a different set of tires. You must actually build a whole new vehicle. We can understand the NGSS the same way: not as another iteration on a longstanding model, but as an innovation in standards.

In contrast, the standards that we have seen previously are iterations of prior standards. In the images above, you see three cars. Each car is an improvement on the one before in some way. You see an older 1970s Dodge Charger. Then you see a hybrid economy car and a Ferrari sports car.

What's interesting is that while these cars will have different ages, different price tags, different speeds and other distinguishing factors, by and large, they get you from to point A to point B in the same way. The acceleration might be a little bit better. The gas mileage may be better. The suspension may be tighter. But at the end of the day you're still driving a car, not piloting an airplane or a rocket ship. They’re just iterations. Iteration is not innovation.

Why is this important? Because a lot of people are under the impression that the NGSS are going to be tantamount to going a little bit faster or putting on a set of snow tires. Doing so, they believe, will help them align to the new standards while keeping the same basic status quo in place.

This isn’t true, though. These standards are not simply a tweak, a new take on the familiar. They’re actually an innovation, a leap from shoes to bicycles, from cars to airplanes. While the metaphors are lighthearted, the message behind them is not. It is crucial, as you look at curriculum alignment and curriculum design, that you see it as more than simply a new set of tires, a different iteration of car.

When it comes to creating an instructional infrastructure for teaching and learning, these standards are equivalent to an airplane, not a different type of car, and we must see them that way.

This will matter more for some districts than others, and for some states than others because there is variation among states under prior standards in terms of how they’ve adapted them or are using them. If your district is already trying to use that airplane model by going above and beyond the traditional model of science instruction, then you will be much better equipped to adapt to these new standards.

If, however, you’re in a district where science standards are equivalent to the bicycle, adapting to the NGSS model might pose quite a challenge. It’s important to understand your starting point, and to see these standards for the radical innovation they are, if you’re to have the best chance of succeeding in the implementation of a STEM curriculum.