As educational shocks occur, they are going to affect everyone. If everyone can collaborate, think of solutions, look at the accepted practices and think about the organizational threads of execution, you are going to fall into alignment and be best adapted to handle this change to Next Generation Science Standards.

In order to become such a team leader, however, it’s important that you truly understand what each tribe values, and how that applies in the educational setting. Below, we are going to take a look at common language you will see in a K-12 setting. By understanding and internalizing that language, you will gain the ability to speak to each tribe on a level that resonates with them. That in turn will give you the ability to move tribe members to higher levels and toward more advanced and effective STEM practices.

Characteristics of Tribes in K-12 Settings

It is necessary as a leader to understand the tribal stages. Each tribe contains people with different thoughts, opinions and feelings, and if you want to move through the tribes at will – as well as move the people in those tribes to higher levels of thinking and being along the way – you need to understand their motivations, beliefs and values.

Each tribe possesses distinct characteristics. For instance, Stage 1 Tribe members see themselves as isolated, view students as having no chance, and have a me-versus-them mentality. Their worldview is hopeless, seeing no way out and wondering why they should even bother.

Stage 2 folks are often somewhat jaded, feeling that their class sizes are too large, and always feeling the pinch of a lack of resources. While not all of education is incapable of helping students and not all students are incapable of becoming successful, people in this tribe tend to feel that they are in a situation where they’re surrounded by incompetence. They dislike administration, the wide spectrum of student needs, and the lack of parent support. Generally, they see their lives as bad: Life is bad where I am, where I'm teaching, where I'm principal or where I'm a district leader.

Stage 3 people tend to have a worldview and attendant language that is perfectionist and critical. They are usually overwhelmed and looking for the black-and-white in everything. They seek to measure themselves against a standard that is itself very black-and-white. Stage 3 people continually measure themselves against Stage 2 peers and other Stage 3 members. They're going to say, "Well I'm better than that person who's a self-appointed expert because of all these things," or "I'm clearly the leader of these other folks who do such-and-such." They are jaded as well, and blame others’ shortcomings on a variety of factors such as class size, lack of professional development, or simply not being as intelligent.

In education, Stage 4 folks are the ones who are really and truly motivated by their values as a team. They understand that they are the best individually, not only because of what they bring to the table on their own, but what they bring to the table as a group. They understand that together we're stronger and together we can support each other. They know that together we can give each other permission to be idealistic and to try new things, because we know that we value things over ourselves individually. When we do make mistakes, they believe, we can rely on each other for help and for reflection and the creation of a way forward. This is where we see incredible movement and success.

There is a whole lot of opportunity at Stage 4, and at schools with Stage 4 tribes, anything can happen in a positive way. Almost any challenge can be overcome. That’s why it’s so important to try to get your group to that Stage 4 level.

At Stage 5 in education, as in any other sphere, people believe that life either is or can be great. They’re highly idealistic, which isn’t always a good thing, actually. This can sometimes lead to naive approaches to big issues, which can often be disconnected from reality. Stage 5 people may strike out with the best of intentions, but may do so in such a hopeful or idealistic manner that there isn’t really much probability of success. But there is a very autonomous quality to Stage 5 folks that makes them feel as though they need to strike out and do it anyway, and sometimes this has grand results.

If you think back to Richard Branson and the creation Virgin Atlantic Airlines, you’ll see what we mean here. Not everybody who's been delayed on a flight strikes out and starts his or her own airline. Most airlines fail, in fact, as did Richard Branson … many, many, many times. However, despite the fact that he made mistakes, he saved his airline from bankruptcy over and over again until it became truly successful.

That's the plight of a Stage 5 tribe member: they tend to experience a lot of unfortunate learning curve aspects. This is not to say that it's not a good thing to be Stage 5 versus Stage 4, but it's important to understand these traits nonetheless. If you are Stage 5 or working with Stage 5 people you must expect to be alone much of the time and have to deal with lots of trials and mistakes.

Working the Model: Why, What, How 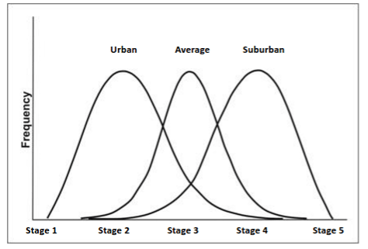 The Stages at which you'll commonly find schools and districts. In very urban environments, we tend to see a lot of people averaging around Stage 2, whereas average tribal culture in education over all might be Stage 3 folks and suburban areas exhibiting Stage 4 traits in educators.

What’s interesting to us here at KnowAtom is that while David Logan’s research indicates that the highest concentration of tribe members is at Stage 3, we have actually found that tribes will skew in one direction or another depending on the educational setting.

We see, for example, a shift toward Stage 2 in large, urban districts and large schools. In suburban environments where schools are smaller, the focus is less around meeting basic needs and educators feel permission to move beyond to higher levels of thinking and learning, we see a shift toward Stage 4 folks.

With this focus and a Stage 2 culture, a sweeping success will be elusive in such schools. In such settings, the focus will only shift to higher level values if they are well articulated and we intentionally ensure that they take the place of data. Of course, that’s not to say that we don't live in an accountability world where standardized tests matter; data is a valid way to measure results and have accountability. While we value it, however, it is not a guiding principle to rally behind in and of itself, whereas teaching and learning are.

So the question becomes: What is involved in teaching and learning that we can all work toward, which is bigger than ourselves and can carry us through every day?

Those values are the reason we walk to the plate, tee up the ball and swing for the stands, no matter what. My favorite example is from US history. Nobody marches off to war or puts his or her life on the line for a 50-cent increase in minimum wage. People do, however, march off to war and put their lives on the line for freedom of speech, for justice and equality, and for other big ideas that are bigger than one person, but which we nevertheless hold high and believe in for each other. Moreover, these are values we can only accomplish together.

So we come back to our values. How can we ensure that they’re a main component of every single day we spend in the classroom or in the administrative office? How can we continually seek to ensure that the mode of instruction and the details of execution are flowing directly from the values we esteem at the highest level?

We have to get away from the focus on trying to get a score up and move toward trying to reach a higher level of purpose. When the purpose is there, the data goes up on its own. Good data are actually the result of solid purpose and good values. While a full discussion of the implications this has for test creation is beyond the scope of this book, it is important to keep this in mind when we think about creating tests. Are we working toward the goal of hitting a certain data point, or are we working for true purpose?

For now, knowing your tribes, managing expectations and finding the right areas in which to compromise will be key leadership skills required to successfully integrate next generation science standards into our schools.