What Science, Technology, Engineering and Math Really Are

The understanding of what science, technology, engineering and math are has shifted quite a bit in the last few years, and too often a definition for them is lacking. If a debate is sparked, it is likely to come from this changing definition; from what the roles of the teacher, student and curriculum actually are; and from the difference between curriculum and standards … a difference that is poorly understood even by many educators.

There are still a few gray areas when it comes to where the Next Generation Science Standards came from and what they’re trying to accomplish, but one thing that isn’t gray is the backing they have from our nation’s preeminent scientists and engineers.

The National Academies have a great deal of influence here. These are people who are by in large outside of politics. They may participate and influence it, but they're not appointed by anybody there. They are who they are, which is certainly not the case with the people backing the Common Core, if you’ll recall. They are inventors, innovators, leaders in their fields, big thinkers.

And while you wouldn’t expect it, this may actually engender some debate, because the definitions they offer of science and engineering are new and don’t align that well with the definitions we still consciously or unconsciously use in our classrooms all the time.

To break this down clearly, there are three areas in which you might find resistance when it comes to using the Next Generation Science Standards.

Let’s start with the first. Although it may surprise you to know it, up until now there haven’t really been wide-sweeping definitions of science and engineering. Under the Next Generation Science Standards, there are. To be specific: Science is answering a question through the use of an experiment. By creating an experiment, you can test a hypothesis and gather data to reflect on whether that hypothesis is true or false. Essentially you can form a data-based conclusion. That's how scientists develop scientific knowledge.

Engineers, by contrast, use that scientific knowledge to solve problems. Engineering is identifying problems and using scientific knowledge to solve them. Primarily they do this by developing prototypes, testing those prototypes and gathering necessary data, then using the data to decide whether that prototype should be refined or replicated. If the prototype is replicated, that's technology.

We typically think of technology as needing to be complicated or involving electronics, but that’s actually not true. This technology could be a doorstop or a doorknob, a new type of plastic or a computer program, or even a process for quality control. All of these types of technology are engineered by someone.

There's a relationship between technology, science and engineering which quickly becomes clear if you engage with them meaningfully. 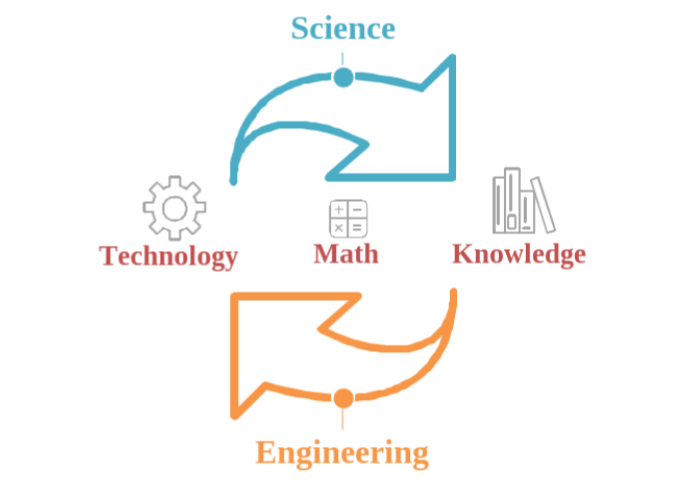 Technology helps scientists ask deeper questions and then answer them, so that they can engineer better kinds of technology. They answer questions they couldn't answer before, or raise new questions, and so the cycle continues. The role of math in all of this is to quantify, analyze and communicate, to make processes and experiments replicable. It is very new for most people, even educators, to think of science, engineering, technology and math as a cycle, with very close relationships existing between them.

But in the real world, this is how it works, and this is how it should therefore work in the classroom if we want to model realistic scientific thinking and prepare our students for jobs in the STEM sector.

Science and engineering are a never-ending cycle, science informing engineering prototypes and engineering making ever-greater feats of science possible. In between, technology, math and knowledge keep the wheels turning.