Was STEAM Involved in Picasso's Guernica? 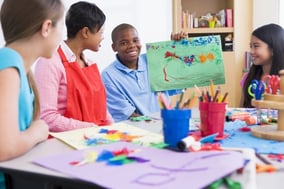 Did you know that the Next Generation Science Standards have applications in art?

While including the arts with science, technology, engineering, and mathematics (STEAM) may seem counterintuitive, the fact is that at their core, STEM and art have higher order thinking in common. STEAM learning is about creativity – discovery and invention – as well as analysis, communication, and critical thinking, all of which are essential to the creation and appreciation of art.

At its core, art is purposely engineered communication.

Take Pablo Picasso’s Guernica as an example. Often when STEAM is referenced, the conversation revolves around aesthetics. Guernica is widely considered one of Picasso’s most famous works, but it’s perhaps not the most traditionally beautiful work of art. So how can it be considered one of his best? Because it was created by a master artist who engineered communication through it, using oil on canvas and his higher order thinking skills – that is, his STEAM skills – to make a statement.

Picasso created Guernica while living in exile as a reaction to and reflection on the atrocities committed at Guernica by German and Italian bombers on behalf of General Francisco Franco. A German Gestapo officer later confronted him, asking, "Did you do that?" Picasso answered: "No, you did." In that reply, you can see Pablo’s Guernica was a statement about the the political realities of his time.

Oil and canvas gave him the opportunity to say something meaningful to a specific audience and the population at large. It’s a powerful analogy, and a powerful construct.

Mastering STEM practices, and incorporating them within the arts, equips students with the critical thinking skills to be better creators and more attuned consumers of art.

The bottom line is that the Next Generation Science Standards' focus on higher other thinking gives us a tool for all disciplines – we just need to use it. It’s a clear opportunity to teach across the curriculum, which is what educators should be considering in any case to get more bang for their buck when it comes to time and learning.

By making good use of the intersection between STEM and art (STEAM), today's PreK-12 teachers may well be transforming and developing the mind of a modern day artist, as talented as Picasso, or the next Einstein, Edison, or Tesla.