If we want to create inquiry-based next generation classrooms in which students are free to use their creative, evaluative and analytical skills, we must first ensure that the leadership is in place to create those environments. It all comes down to our teams, first and foremost. To understand why this is so important and how it impacts education, it is first important to understand tribal leadership itself, and how we choose to organize ourselves in community. 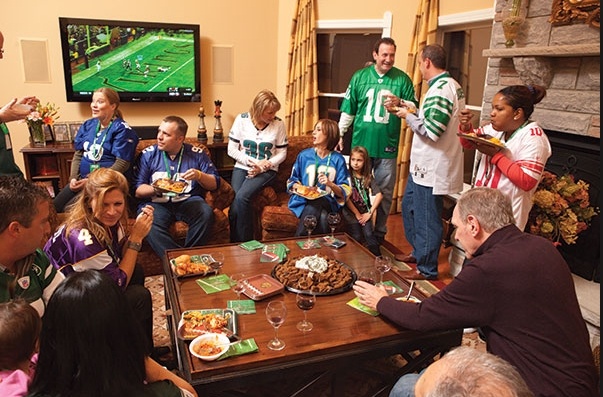 Since the beginning of time people have banded together to form tribes around shared values and language. From 1998 to 2008 a Harvard researcher David Logan and his colleagues studied 24,000 people and how and why they form tribes, how those tribes behave, and how those tribes are led. This is an example of a tribe. Image credit: medium.com/sportspickle

Although the word "community" often has larger connotations, our schools are in and of themselves communities. People choose to stay in a school as an educator based on whether or not they like it there and whether or not they connect with the people there. That's largely based on the kind of culture that is set by the principal and what principal uses in terms of their own gut criteria for hiring and firing, and the tone that they set. 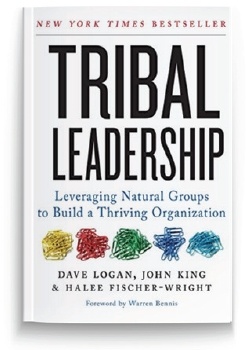 David Logan's book Tribal Leadership: Leveraging Natural Groups to Build a Thriving Organization is a seminal work describing how the ways in which people self-organize, and how to make use of these groups to instill change and drive progress.

The above image shows David Logan's 2011 book Tribal Leadership, in which he explains that people tend to organize themselves into five different groups. Logan, King, and Fischer-Wright define a common theme from the ten-year study of approximately 24,000 people in more than two dozen corporations: "The success of a company depends on its tribes." The strength of its tribes is determined by the tribal culture, and a thriving corporate culture can be established through an effective tribal leader.

We're all members of tribes and have a tribal language, and this includes students as well as teachers and administrators. As we go through the five tribes, we will think about how well-equipped members of each tribe are to make progress, and ways in which they might be held back. After that we'll look at some specific K-12 applications so we can see how the theory of tribes helps with instilling a growth mindset in science class.

The five basic stages as described by Logan in Tribal Leadership, and the attendant thought patterns that accompany them, are read as follows: 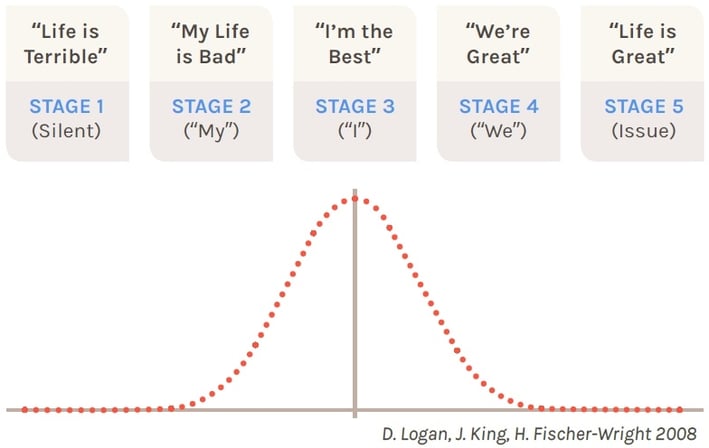 We will break each of these stages and the accompanying mindsets down in more detail as we explore the attributes of each tribe. 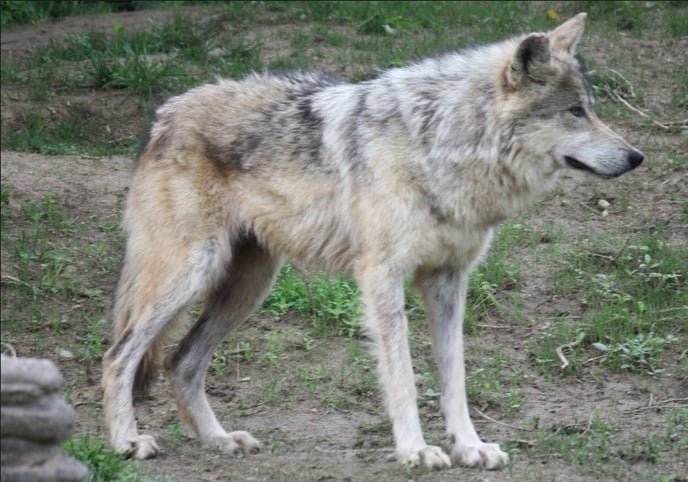 The lone wolves of Stage 1 band together around the idea that everything is bad; not just their lives, but all life. Image credit: commons.wikimedia.org

The stage 1 tribe comprises the lone wolves. Lone wolves are responsible for acts of crime such as school shootings, gang footmen, terror cells, and other violent approaches to dealing with the perceived negativity they encounter in the world. The first tribe is a place of despair and isolation. When it comes to teachers, lone wolves usually view teaching as a profession as bad overall, and don't tend to stay in education for very long. They are, in fact, often counseled out of the profession.

Stage 1 moves to Stage 2 when people advance from "life is bad" to "my life is bad." The analogue for teaching is moving from "teaching is bad" to "the place where I teach is bad." It is an improvement over believing that all life or all teaching is bad, but it's still fairly unhelpful when it comes to establishing a growth mindset. These are the people who tend to form boycott groups. 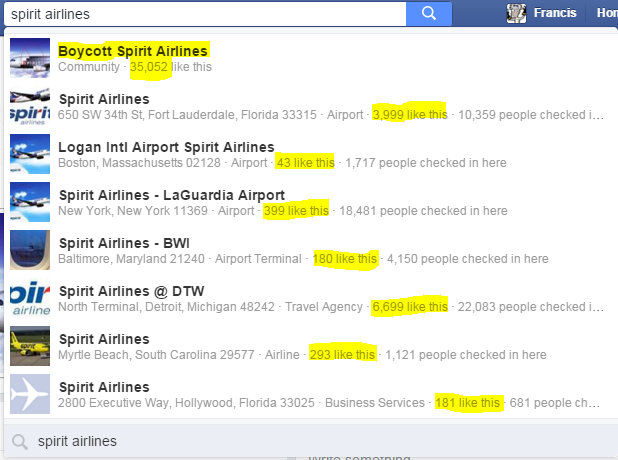 In response to a Spirit Airlines fiasco, airline passengers were stuck in a small and crowded terminal for hours on end, with only one bathroom and one food option. This led to a Facebook boycott group. 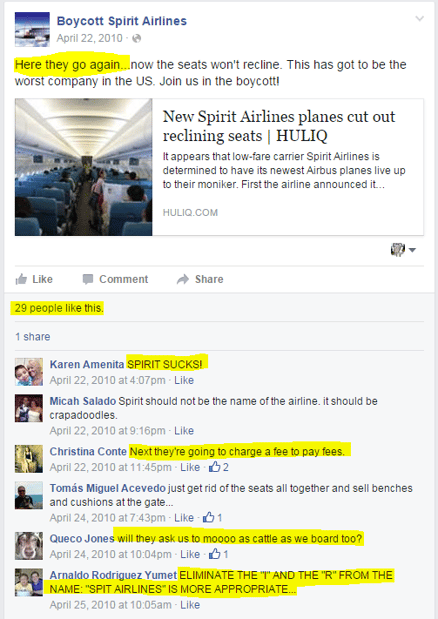 Level 2 tribes talk to one another to affirm their feelings that life is bad, and use a lot of negative language.

When you look at any one of the comments in the image above, you see that they use "my life is bad" language: Here they go again. The seats don't recline. This has got to be the worst company in US history. Join us in the boycott. They're calling out, helping to form a group around their ideas.

This is an important concept, because your teaching team and/or school will form groups around specific sets of language over time. If they form tribes around the idea that life stinks or teaching stinks, it won't serve students or the school environment very well. 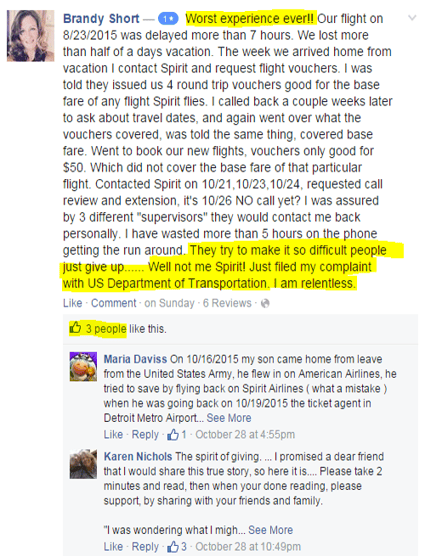 An example of a member of a Level 3 tribe, who sees herself as smarter and better than the rest.

At level 3, the tribe is composed of folks who see themselves as better than the others. They appoint themselves as smarter, see themselves as more advanced, and take pride in that fact. People in this tribe go from boycotting something like Spirit Airlines to seeing themselves as smarter than the rest. They might, for instance, go to another value airline, such as Jet Blue. Their opinion of themselves comes across in their language, as shown in the image above: "They try to make it so difficult for people that they'll just give up. Well, not me. I just filed my complaint with the US department of transportation. I am relentless." 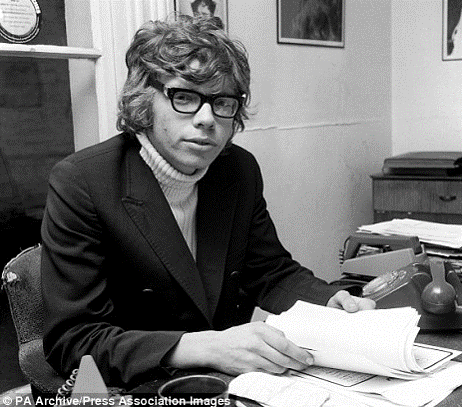 This is Sir Richard Branson. Decades ago he was not “Sir,” but a poor guy running a failing student newspaper and a failing record shop. Image credit: dailymail.co.uk

A stellar example of a level 4 tribe member is Sir Richard Branson. Decades ago, he wasn't Sir Richard Branson, but a poor guy running a student newspaper. He himself got stuck in an airport with a cancelled flight. He took exception to being stuck in this airport. He said, "You know what? We're better than this." He turned around in the airport. He got a bunch of people together. He said, "We want to get home. We can actually charter our own airplane and get out of here." That's exactly what he did. He got like-minded people who saw themselves as being able to get beyond the situation and charter an airplane.

He motivated this group. They escaped the drudgery of being stuck in an airport by just chartering a plane ad hoc. He was still just a poor guy with a student newspaper, but he was able to leverage the power of the shared values of that group and thus empower it. It's probably no surprise that somebody like Sir Richard Branson went on to become a multi-billionaire and actually take that value-oriented ethos and apply it to all of the world's big issues and different areas. 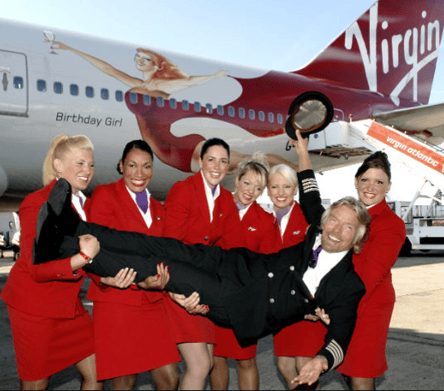 Branson leveraged shared values and group self-awareness to create an airline (and many other businesses) that successfully played on level 4 tribe ethos. Image credit: insidevancouver.ca

Branson goes on to create an airline that he thinks is better than the rest, that will treat people differently, that will meet their needs and solve big issues. Not just an airline, either, but telephone companies and finance companies as well. Everything that's part of the Virgin suite of companies is geared toward trying to solve these issues. Where that comes back to teaching and learning is that around these new standards, the people who are going to get to a place of believing "life is great" are the people who have first gotten to a place of valuing what these standards are really about and the kind of environment that needs to be there for teaching and learning.