What is the Claim, Support, Question Thinking Routine?

The Claim, Support, Question thinking routine helps students develop key thinking moves like identifying generalizations, offering counterarguments, reasoning with evidence, and asking questions. Created by Ron Ritchhart and researchers at Project Zero, this thinking routine shows students the importance of identifying, understanding, and making claims based on reasoning and evidence. Strong claims, sound reasoning, and thoughtful follow-up questions ultimately lead to a deeper understanding of topics and concepts. The more we know, the more we realize we don’t know. This helps us to understand that we always need to ask new questions as our understanding evolves.

Investigating scientific phenomena provides an excellent catalyst for exercises in critical thought. After students have posed questions, stated a hypothesis, conducted experiments, and put forward a claim, this routine provides an opportunity for students to figure out what questions need to be addressed next. The cycle of scientific inquiry is always ongoing!

This routine is also flexible across subjects and useful any time an educator invites students to provide further evidence in support of or opposition to claims they make or encounter during the course of any scientific inquiry.

Students start this routine by spotting something and making a claim about it. The reasoning behind this claim might be obvious if this routine is used after a scientific experiment, or it may be less obvious if it is used in an early discussion of the phenomenon.

A student's claim will ultimately be supported or unsupported. Strong claims can always be supported by evidence as part of an evidence-based conclusion. Prompt students to make claims they feel they have evidence to support later.

When using this routine in the context of forming a conclusion to a scientific experiment, a useful prompt may include: “After investigating your hypothesis, what claim can you make about that hypothesis knowing the data that you have gathered?

After students have identified or stated their claims, push them to press one another by asking, “what data allows you to make this claim?” The goal is to have students articulate what specific evidence leads them to believe their claim is true For example, it may be a comparison of average height in a treatment group compared to the same calculation in a non-treatment group. This number and reasoning provide evidence and support for their claim. The strength of the support depends on the strength of the evidence and reasoning. For example, are there other interpretations of the same data that would lead to an opposite conclusion?

The best evidence is always gathered through careful observation, analysis, or experimentation. As students seek out support and evidence for their claims, encourage reflection by engaging students in explaining their claims with their evidence, and act as a thought partner by asking what other claims might be supported by the same evidence.

Useful Prompts:
“What would you say to someone who looked at your evidence and made the opposite claim ______?”
“What makes you say that?“
“How does this specific evidence support your claim?”
“What evidence would make this support even stronger?”

This step helps students return to the scientific process and remember that investigations often raise more questions. The Claim, Support, Question thinking routine does an excellent job of drawing attention to the importance of evidence-based reasoning and questioning as an ongoing process.

Useful Prompts:
“How might someone question your claim?”
“Is there one piece of evidence that is key to the support for your claim? How could someone reasonably question that evidence?”
“If __________ is false then ________ is an unsupported claim. How do we know _______ is true?”

The Claim, Support, Question thinking routine is applicable both in and beyond the science classroom. Students are asked daily to form conclusions across all subject areas as they explore concepts. Classrooms become more student-centered when students generate their own claims and routinely follow those claims up by developing their own support and questioning.

Are you ready to start the Claim, Support, Question thinking routine? Download a free anchor chart to display for your students and create a habit of pressing for evidence as a way of learning every day!

Ready to learn even more about thinking routines? Visit this page dedicated to the topic. 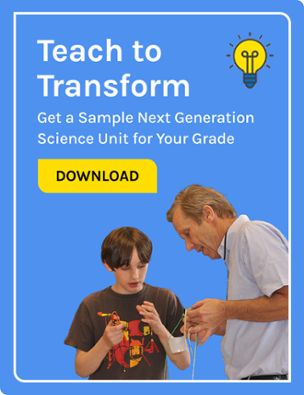