The Role of Students, Teachers, & Content Under Next Generation Science Standards

The Next Generation Science Standards represent a foundational shift for a lot of educators, because this is not how our schools of education teach science teachers, elementary generalists or others about science. The mode of instruction for science that has been standard in our classrooms – those teaching students and those educating teachers both – follows a traditional model. 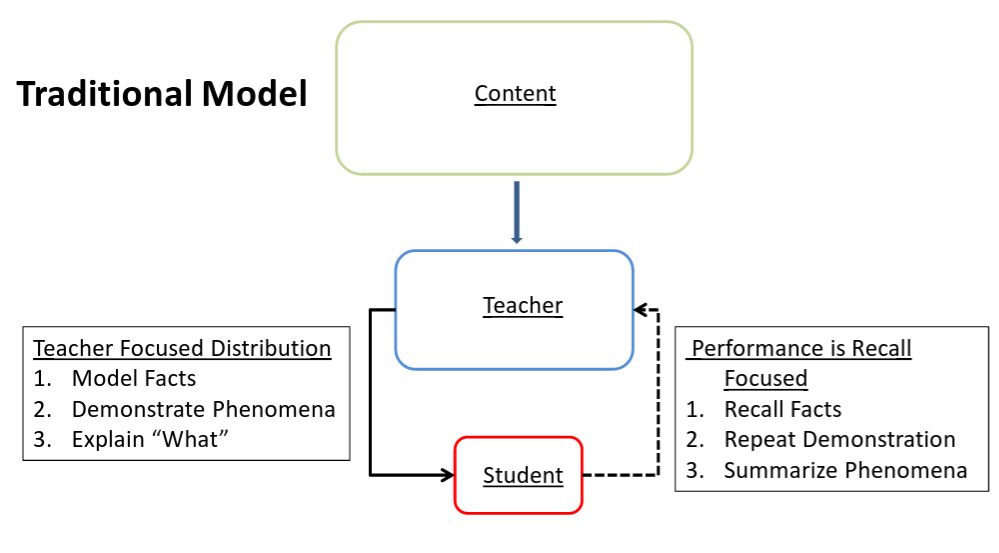 The traditional model of science education, in which the teacher hands facts to students, demonstrates phenomena and explains what’s going on. To prove their understanding, students recall these facts, perform the same demonstrations and summarize the phenomena their teachers have explained. This is a performance-recall model of education.

Here is how the traditional model works: You as the teacher are the content expert. You have knowledge students don’t have, and it’s your job to:

It is your students’ job, on the other hand, to:

This is how students show that they’ve learned what you’ve taught. In some states, however, where inquiry standards are present, more value has been placed on students developing skills to uncover facts themselves, to ask questions and so on.

Some of those inquiry standards, depending on the state and how the standards are implemented, do bear a resemblance to the Next Generation Science Standards, and in such cases states have done a lot to move past the traditional model. These states are the exception, however; by and large, the orientation toward science is this traditional model of fact and phenomenon delivery and recall.

Effective instruction capitalizes on students’ early interest and experiences, identifies and builds on what they know, and provides them with experiences to engage them in the practices of science and sustain their interest.

The Next Generation Model

With the Next Generation Science Standards, we have a new definition of effective STEM instruction. The definition is essentially a movement from what you see on the left in the picture above, to what you see on the right. Yet this is a powerful demonstration of some of the issues in messaging surrounding science education. This picture on the left, believe it or not, is from the National Research Council's own documentation, yet it clearly displays a traditional model of education: students gathered round a teacher, watching a single demonstration rather than experimenting on their own. This problem reaches much, much further.

If you go, for example, to a photo stock site and search pictures for “kids’ science” or “science class,” you’ll come up with a very specific archetype. Perhaps you’ll find some beakers, a few bubbling liquids or children looking excited. Or maybe you’ll see some formulas on the board and a teacher lecturing.

This is exactly what our society’s picture of science education looks like.

While a teacher certainly plays a crucial role in science education, our goal is to move what actually happens in the classroom (and the public perception of it) to the model on the right, in which students are actively engaged in inquiry – creating, evaluating and analyzing on their own.

Effective STEM instruction starts early, from pre-K on up. It identifies and builds on what students already know at each step of the way. It is intentionally nurturing and carefully scaffolds on preexisting teaching. It provides them with experiences to engage them in the practices, those eight competencies that we looked at above. These skills are specific to science and engineering, and should be taught in such a way that they sustain student interest throughout the years. The picture on the left does not help successfully engage in this next generation model; rather, it relies on a teacher pre-teaching, modeling, demonstrating and then watching for student repetition. Here the teacher is engaged in the practices, but the students are not.

NGSS seek to change that.

The image on the right shows students who are actually in the role of scientists and engineers. Their class has identified a problem that fits in a sequence of instruction and inquiry September through June. They're relying on what they know, not only from prior years, but from units in the same year. This experience will effectively engage them in that role of scientist and engineer, because they have to engage the practices in order to successfully meet the challenges before them.

What you see in the picture above are students working together as a pair, in the driver’s seat of science and engineering. Their work is original to their team. Sure, someone else in the class may have the same approach, but their approach has not been pre-taught or modeled for them; they developed it on their own.

As a result they are engaged in building a framework of understanding, taking their ideas, engaging the practices and then using them to collect data and reflect back on those ideas.

It's a much more student-centered approach and it really changes the way that science happens in the classroom. 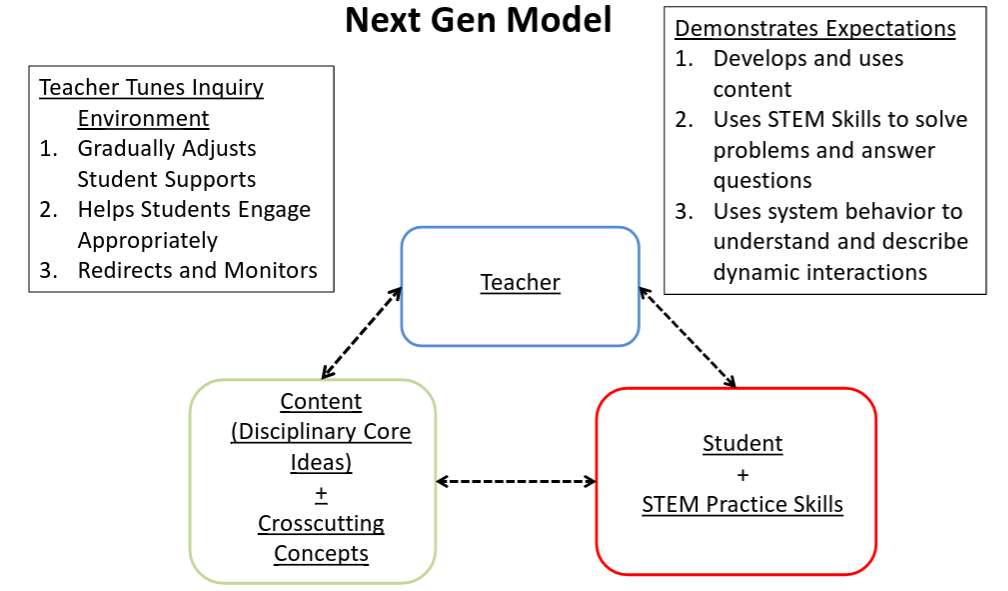 The next generation model of science instruction removes the teacher’s omnipotent power as instructor and instead makes them more of a partner in student learning, giving students the freedom to use practices and engage in inquiry to draw their own conclusions.

That next generation model of instruction is about students developing science and engineering practice skills. As students develop and internalize those skills, they employ them to access, develop and use the content they’re learning. This helps them absorb and understand crosscutting concepts (which we will address in more detail below) and system behavior.

The teacher's role in this model is not to be the one who delivers content, but to be one who tunes the inquiry environment, because that’s what the classroom becomes under the next generation model: an environment for inquiry. In this classroom milieu, teachers are responsible for:

Correctly applied, these strategies don’t remove the student from the role of scientist or engineer, but rather help them engage with the practice, apply their skills and develop both over the long haul. Students, for their part, have to step into the role of scientist and engineer fully, demonstrating that they are meeting expectations through:

Students must be able to describe and analyze and evaluate contexts based on how content interacts. If they can do so, the teacher is doing his or her job. Simply recalling facts or repeating demonstrations is not enough because those are lower orders of thinking.

Our focus with the Next Generation Science Standards is a higher order of thinking, which is why these standards have been specifically developed the way they have.