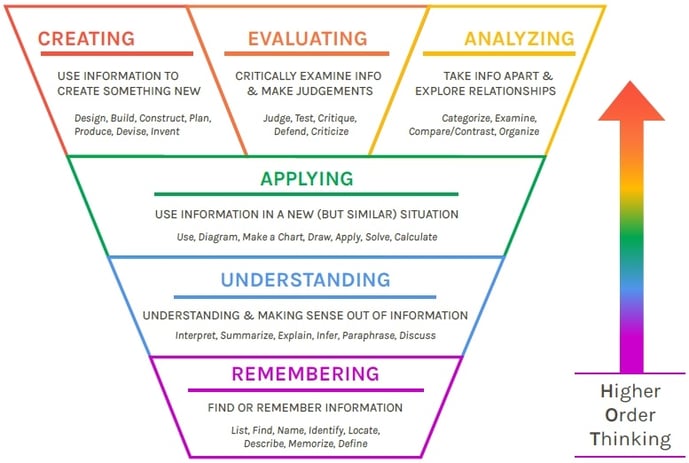 Bloom's Taxonomy is traditionally a pyramid, but in this rearranged version, creating, evaluating, and analyzing have been placed simultaneously at the top, because full inquiry in a next generation classroom requires simultaneous use of these skills.

First and foremost, let's talk about the role of higher order thinking. Next Generation Science Standards, because they exist in three dimensions and detail not just content or phenomena, but actual skills students need to develop. Without both knowledge and skills, they cannot understand the content, identify crosscutting concepts that crop up in multiple disciplines, or understand how this content manifests in nature.

In order to help students do that, we need to focus on higher order thinking. When you picture Bloom's taxonomy, you most likely think about a six-level pyramid progressing from lowest order of thinking (remembering, understanding and applying) through higher order thinking  (analyzing, evaluating and creating), the last of which forms the apex. But with the new standards, that arrangement has been changed; creating, evaluating, and analyzing now happen simultaneously.

It's important to understand that when it comes to grit, which we are going to define in a moment, this new next generation learning environment is crucial. It is also much more demanding than the traditional standards. Traditional standards are based on facts that require students to memorize and recall to demonstrate proficiency. The new standards, on the other hand, require students to create, evaluate, and analyze using their science and engineering practice skills, developing content in order to answer questions and solve problems.

Because that's what scientists and engineers do. Scientists ask questions and answer them through planning experiments, carrying them out, and using that information to form conclusions. Engineers develop prototypes in a similar fashion, designing them, testing them, gathering data, and using evidence-based conclusions to decide whether to fabricate the prototype or refine it.

To develop these skills, students must be able to create, evaluate, and analyze. That requires a major shift in current instruction techniques and science curriculum from a traditional environment where students and teachers both expect content to be delivered in the form of direct instruction. Grit fits in here because it is an internal driving mechanism that causes students to use determination in a specific direction.

When Angela Duckworth, author of Grit: The Power of Passion and Perseverance, interviewed the actor Will Smith about how he explains his success. He said that he didn't really see himself as particularly talented. Instead, he sees himself as somebody with a "ridiculous, sickening work ethic." She dug deeper, asking him how he could explain his level of success if he didn't have a particularly noteworthy amount of talent and was simply a hard worker. His answer:

"The only think I see that is distinctly different about me is that I'm not afraid to die on a treadmill. I will not be outworked, period. You might have more talent, more smarts, more looks. You might be all of those things and have it up on me in nine different categories, but if we get on a treadmill together and last man on wins, there is two things. You are going to get off first, or I'm going to die. It's really that simple."

This story well illustrates the idea of grit: It involves a goal—a direction—and it involves determination.