Students Learning as Scientists and Engineers

Given the right classroom framework and stimulus, students can become scientists and engineers in any setting. Whether it’s an urban environment, a suburban environment, or a rural environment, it is equally possible assuming students have the support they need and curriculum effectively scaffolds on previous learning.

Even in an environment like the one pictured below, students are still behaving as scientists and engineers because they have been given the proper tools. 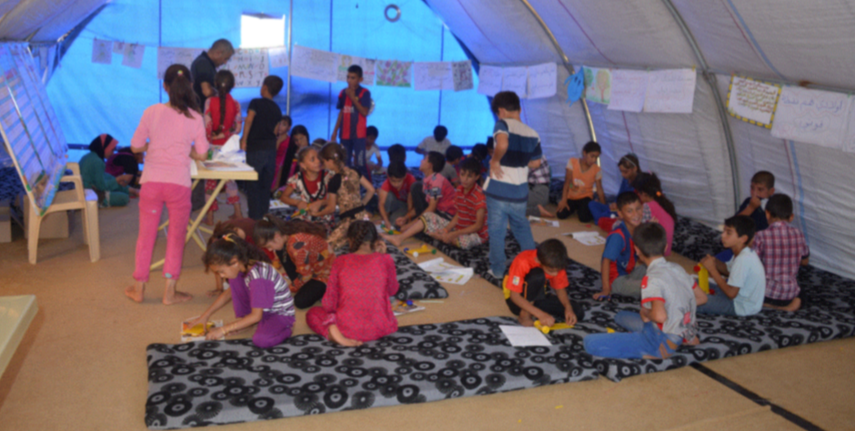 Science and engineering skill-building is just as possible in a Kurdish refugee camp as in an affluent suburban setting, given the right tools and instructional mindset.

This is one of the most challenging environments that we've ever dealt with here at KnowAtom. Here you see students learning Next Generation Science Standards through KnowAtom material in refugee camps in the Kurdish region of northern Iraq.

Despite their difficult and often harsh surroundings, the students pictured are all engaged in effective learning as scientists and engineers. The photos demonstrate the full release of responsibility, allowing students to:

It’s important to note that this picture doesn’t simply show students building,  making, or doing things. Their work is purposeful. Each of these students is engaged in trying to solve a problem or answer a question using their skills. Whatever they create yields data, which they then analyze and use to form conclusions as part of that next generation inquiry environment.

The role of these new standards is to provide purpose for science curriculum.

That’s a key difference in the new understanding of what it means to teach STEM concepts. The Next Generation Science Standards are the purpose of the curriculum. Curriculum, however, will go beyond the standards to make connections, introduce new concepts, reinforce those that have already been learned, and so on.

Curriculum must be backed by the standards themselves or there is no point to the lesson.

In the case of the picture above, the achievement of a standard might be when students share their team's findings. In an engineering context, students might explain, "We developed this prototype. Here's how it solved the problem. We know it solved the problem because we were able to gather this data that proves it." Then other teams might respond, "Well, we did something similar but it was different in this way and we had different results. Here's how and why."

That is a powerful example of how the Next Generation Science Standards come to life in a classroom through curriculum.