There has been a lot of negativity surrounding the Common Core State Standards, I would argue much of which results from the ways in which communities learned about them, rather than their actual worth. 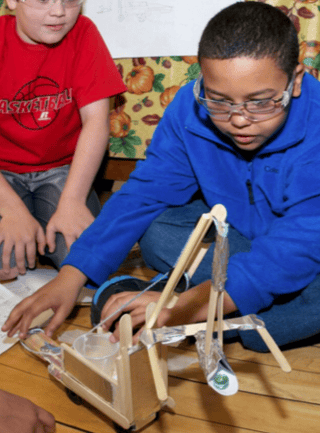 As states around the country evaluate the Next Generation Science Standards, it’s worth taking some time to evaluate what caused the backlash with Common Core to prevent a similar backlash with NGSS.

To begin, we need to start with how both standards first came about.

The Common Core State Standards came about because of the work of two groups: the National Governors Association and the Council of Chief State School Officers (CCSSO).

Both of these groups are in essence advocacy groups, geared toward making greater strides as a nation than states might be able to make on their own.

In other words: The Common Core standards for ELA and math come from the work of two advocacy groups and their partners. Those groups had the funding and political support to bring these standards to life.

In contrast, the NGSS stem from organizations such as the National Academies of Science and Engineering, the National Institutes of Health, and the Carnegie Corporation.

These organizations are experienced with innovation and see a legitimate need for these new standards. They are therefore asking highly attuned questions and have been helping to fine-tune the messaging going through states and trickling down to the classroom level.

The result is that some states have taken a look at the Next Generation Science Standards and adopted them wholesale. Others have made a few tweaks, essentially changing them in name though not in content or spirit.

It’s important to take a moment here to reiterate that the motivation behind the development of the Common Core standards is good. The driving vision behind them is laudable, and developing high-quality academic standards for math and the English language is certainly important.

However, while the Common Core State Standards really tried to do good things for students, teachers, districts, and the nation as a whole, communication about them ended up tainting the actual rollout of the standards themselves.

Consider the following. The Council of Chief School Officers put out the message, which filtered down through the state, superintendent and principal. At each point, the communication informed the resources in use, which the teacher then used to teach students. The CCSSO itself influenced testing, then administered directly to students with little collaboration with resources. Parents gleaned their Common Core understanding primarily from their children.

If you're beginning to see that the rollout of these standards was a lot like a game of telephone, you're right.

There was a trickle-down effect that ensured that by the time the standards and messaging reached superintendents, principals and teachers, they were muddied and informed by multiple layers of individual opinion and decision-making. This communication process was probably the No. 1 reason that the Common Core State Standards had so much trouble.

In contrast, transmission of standards and intent is much more precise in the case of the NGSS.

The Next Generation Science Standards themselves inform the state message. This starts to trickle down in the same way we saw with Common Core State Standards, from state to superintendent, to principal and so on.

The interesting point here, though, is that the documentation attached to the standards is much better, and outreach to curriculum providers is much more comprehensive. With the Next Generation Science Standards, in fact, there's really no excuse for curriculum to not reflect the standards, because the messaging is very consistent.

3. Common Core vs. NGSS: Resources Designed for the Standards

This leads into the third problem with Common Core, which had to do with the quality of the resources themselves. The origin of many “Common Core” resources – many generated by publishing companies calling their materials "Common Core-aligned"—failed to reflect alignment.

If this sounds a little harsh, know that many of the large publishing companies involved in generating Common Core resources were actually involved in the funding of the Common Core State Standards, which is a distinct conflict of interest. This, combined with general confusion and multiple layers of personal opinion and influence, combined to form the first impression of what Common Core was, typically in the form of the resources themselves.

An example of poor resource alignment from Alec Torres' article in the National Review. This skip-counting problem does not align to Common Core standards.

Let's look at a concrete example. This question was featured in a fairly famous article in the National Review from March 2014, entitled "The Ten Dumbest Common Core Problems: Sample questions guaranteed to make your brain hurt in all the wrong places." The question in question, if you will, was from the New York State Common Core math curriculum: Use number bonding to help you skip count by seven, making ten and using the leftover ones to get the final answer.

If you're like most people, you probably had to squint and reread a few times to figure out what the question is even talking about.

Imagine how difficult this would be for a child. What is particularly interesting (read: distressing) is the fact that number bonds don't even appear in Common Core standards. Skip counting, in the context of the standard, is to count within 1,000 by 5s, 10s and 100s. This question, needless to say, is not from the Common Core. It's just a question that someone behind the New York State math curriculum thought was appropriate and adopted.

Unfortunately, when a resource doesn't accurately reflect standards, as in this case, and a state, superintendent or principal chooses to adopt it anyway, it negatively impacts both teachers and students. It's also confusing for parents, who come home from work and see the problem, only to scratch their heads and say: " This doesn't make sense to me as a grown adult with my background, so how is it going to make sense to my first grader?"

We have seen this scenario play out over and over and over again. It is the result of poor communication, a chain from the people developing these standards to teachers, students and parents. It results not only in poor implementation – the above example being an example – but in public outcry as well.

Moving forward, we have to wonder if problems like this will play out for the Next Generation Science Standards as well. The short answer? Maybe, but hopefully not.

The quality of an NGSS resource depends on:

A lot of what we've seen so far are textbooks and kits, which are basically the same as they were under the old standards, with some mild changes here and there, maybe a hands-on or make-by-number activity. Much of it isn't very innovative.

So now the question becomes, do superintendents and principals buy this curriculum? Do they buy these resources and put them in their classrooms? Because if they do, that affects their teachers.

How well these superintendents and principals understand the Next Generation Science Standards, via state messaging and the standards themselves, also affects teachers. These are the ideas that will be reflected in the classroom, and will contribute directly to student impact.

The big question really comes down to what happens between the state, the superintendent, and the principal.

How attuned are states, superintendents, and principals to the purpose and spirit of Next Generation Science Standards? How well are they versed in what the three dimensions are? What will this environment look like? It is partially determined by how standards get translated into curriculum, because although they are often confused, the two are not the same.

The messaging as it trickles down from the state to the principal, before it reaches the level of classroom implementation, is where the success or failure of these new standards will be determined. If a state doesn't budget for it, or a superintendent doesn't budget for it, that's going to make success difficult. The resources and the effectiveness in the classroom are going to be impacted, and students and parents by extension.

Given that, it's important to think about where these standards came from. Do the superintendents, states and principals invest time to understand what the standards mean and what they look like in the classroom? Do they spend time thinking about what appropriate resources look like? Do they make an effort to suss out resources that claim to be appropriate, yet really aren't?

If so, there's a much better chance these standards will be implemented, and implemented well, and that testing will correctly identify students who actually understand the standards and are prepared for later life and careers. 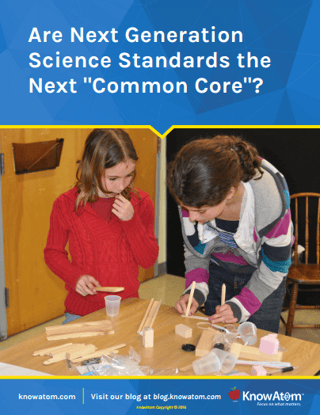 Want to learn more about Common Core compared to NGSS? Click the button below for a free download of our eBook.