Making More Effective Use of the 5E instructional model under NGSS 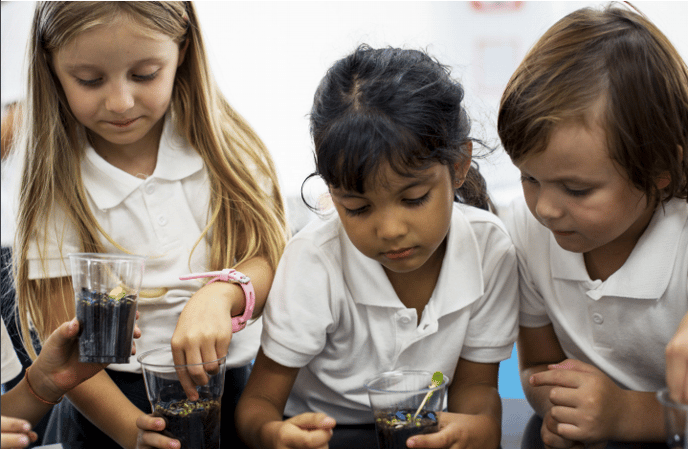 In order to properly prepare students for mastery and meeting the NGSS performance expectations, we must change our perception of the 5Es from a linear process to an iterative spiral. 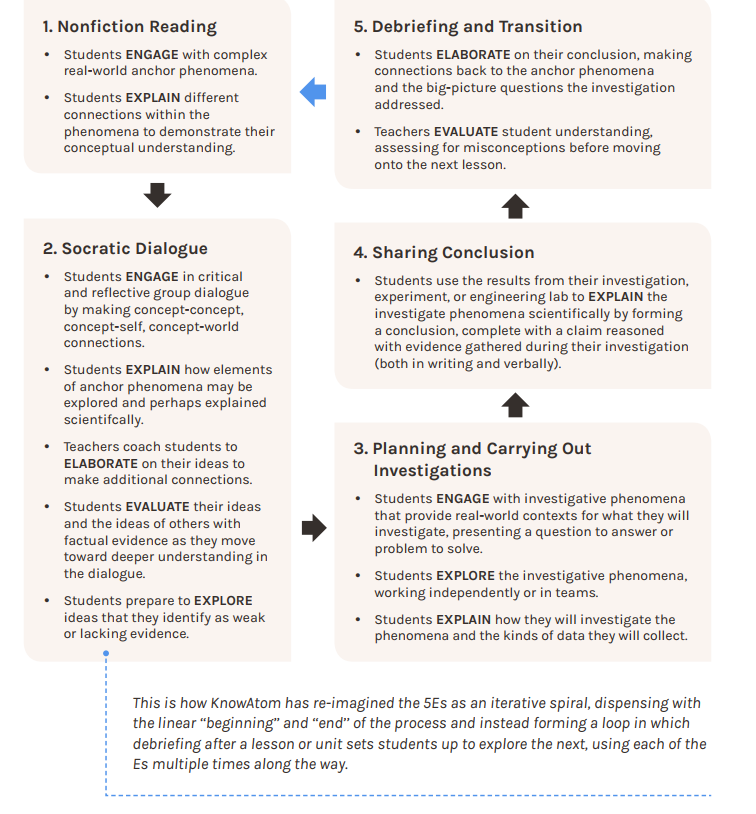 As you can see in the image above, with KnowAtom’s approach each phase now includes multiple Es, linking together one to the next. When you reach the 5th stage, the cycle is not “complete,” but ready rather to inform a new iteration. Our breakdown goes like this:

In nonfiction reading, students engage with complex real-world anchor phenomena as well as explain different connections within the phenomena to demonstrate their conceptual understanding.

When we move to Socratic dialogue, students engage in critical and reflective group dialogue by making concept-concept, concept-self, and concept-world connections. They then explain how elements of anchor phenomena may be explored and perhaps explained scientifically. Teachers coach students to elaborate on their ideas to make additional connections, while students evaluate their ideas and the ideas of others with factual evidence as they move toward deeper understanding in the dialogue. Students then prepare to explore ideas that they identify as weak or lacking evidence.

Afterwards, students have an opportunity to share their conclusions – the results from their investigation, experiment, or engineering lab – to explain the investigative phenomena scientifically by forming a conclusion, complete with a claim reasoned with evidence gathered during their investigation (both in writing and verbally).

Lastly, debriefing and transition are opportunities for students to elaborate on their conclusion, making connections back to the anchor phenomena and the big-picture questions the investigation addressed. Teachers evaluate student understanding, assessing for misconceptions before moving onto the next lesson.

As you can see, this is a much more dynamic process both in terms of how the 5Es get delivered as well as in how they interact with the curriculum and the learning environment.

Role of the Teacher

Throughout the year, the teacher’s role changes. At the beginning of the year, students have a significantly less well-developed skill set in relation to higher order questioning and Socratic dialogue, so teachers play the role of coach much more, asking more questions and encouraging discussion. As students learn the skills to argue scientifically and ask the questions themselves, however, the teacher can step back. The students have built a habit of elaborating that they can employ on their own.

Sharing conclusions is an opportunity for students to explain their reasoning and learn scientific argumentation, and it is a critical skill. The same goes for making connections back to original hypotheses and evaluating one another’s work – having scientific discourse, in other words.