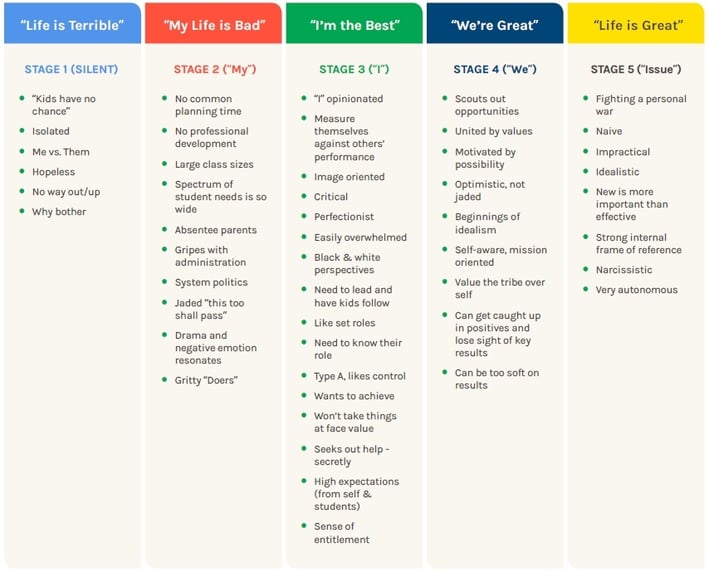 Characteristics of the key tribal stages.

If you're looking for some pointers on how to understand what type of a tribe you're dealing with—important if, say, you're a new principal to a building and have multiple tribes involved—you can look to the indicators in the image above. Stage 1 tribe members will say things such as, "The kids have no chance." They will be isolated, will have a Me vs. Them attitude, can see no way out, and don't understand why they should bother.

Stage 2 tribes will talk vociferously about their problems: no common planning time, no professional development, large class sizes, absentee parents, or system politics. These tribe members are going to be jaded, downbeat, gripey, dramatic, and negative. Such people are also very opinionated—they are the "I" folks, after all—and will frequently measure themselves against other's performance. They might, for instance, take webinars in secret, then bring these ideas back to their peers and enjoy looking smarter than the rest. Moreover, they tend to throw the baby out with the bathwater, hold fixed mindsets, and unintentionally limit the possibilities for growth in students.

Stage 4 teams work hard to scout out new ideas. They are united by values, look toward possibility, and are optimistic about what can still be achieved. They believe in the "power of yet," both in terms of what they themselves can accomplish and in terms of what students can do. Here we see the beginnings of idealism on both an individual and a team basis. However, they may value the team above themselves or get caught up in positives and lose sight of key results.

Folks in a stage 5 tribe sometimes come off as idealistic, impractical, and naïve, as well as narcissistic and overly autonomous. They constantly fight issues, but may do so at the expense of actually helping. They often see themselves as fighting a personal war, and they depend on a strong internal frame of reference.

A very important thing to realize is that tribes can only hear their own languages and the ones on either side of them. Someone in stage 2 cannot hear the language used and the values employed at stage 4 (though they can understand stage 1 and stage 3 language). Instead, people have to transition from one stage to the next themselves before they can hear further. This is borne out by David Logan's research and is true across different types of organizations and in different fields.

The role of tribal leadership is to learn the language of all the stages and begin connecting people from below with people above. That's how you become identified as a leader and actually begin to shift the environment as a whole.