It is now time to redefine how we think of the scientific or engineering explanation, take a closer look at how the evidence statement fits into this explanation, and discuss how to introduce the scientific and engineering processes by introducing students to first one process, then helping them map that experience to the next, and the next. In this way, they will eventually build familiarity with the process in a variety of situations and be able to use it creatively on their own—both in school and later in life. 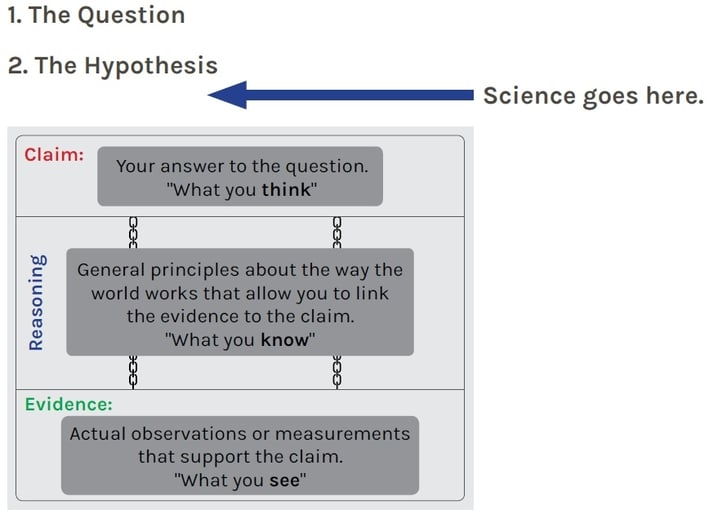 While this CER model is flipped, with reasoning in the middle instead of at the end (as it is used in ELA), the CER model does play an integral role in science and engineering.

The explanation is an integral part of the science and engineering process. According to the CER model, an explanation consists of:

As such, it is a critical final piece of the scientific or engineering process: forming a conclusion.

Another way to think about a conclusion is aligning the processes in which students have engaged as scientists or engineers with the purpose of being a scientist or engineer. If you think about it this way, the conclusion—and the CER process within it—becomes truly vital to a well-reasoned answer.

The scientific and engineering processes are slightly different, but each progresses through the same basic stages of identifying a question or problem, designing experiments or solutions, gathering data and analyzing it to form a conclusion.

Let's say you're a scientist. You ask a question to which you would like an answer. Your question yields a hypothetical true/false hypothesis that you can test. Then you design an experiment to help you text it, gather data, and draw a conclusion. This process will require the scientist to use all of those eight practices from Next Generation Science Standards (NGSS), all of which are skills specific to the discipline.

The Importance of Evidence

The important point to understand is that in order to understand the answer to the question and the validity of the hypothesis—to form a conclusion, in other words—we have to look at how the evidence speaks to both. Remember, evidence is a crucial piece of CER, the bridge between the claim and the reasoning. That evidence will mainly come in the form of results that prove the hypothesis true or false. It may or may not answer the question, in which case you might need more iterations to determine the correct answer. Remember, in the case of the corn, we could only say the hypothesis was false, but needed more evidence to answer the question.

To create this bridge, and to write a conclusion, students will need good ELA skills. We're not saying that your students must have topnotch ELA skills, but you can see how having ELA skills is important. If your students are English language learners and cannot yet write out their conclusions, it's fine if they instead verbalize them. Language is a reflection of thinking, whether it comes in written or spoken form. And that's key here: What we're really looking for is the thinking behind the linkage between the claim and the evidence, the reasoning that comes in to play to explain how the two connect. The thinking and purpose emanate from the question and the hypothesis, which in turn give purpose to our claim, and to our evidence, and to our reasoning.

Part of the purpose of an experiment is to change the way we think. By understanding the question and hypothesis better as the result of engaging in a planned investigation, an experiment and an analysis of the data, scientists are able to reflect back upon the original question and hypothesis in a much more meaningful way than they would have been able to without the experiment and its results. That's why the scientific process and the engineering design process are not only relevant, but super relevant. Anybody who is not engaging in the full process is merely coaching students through the motions of science or engineering. 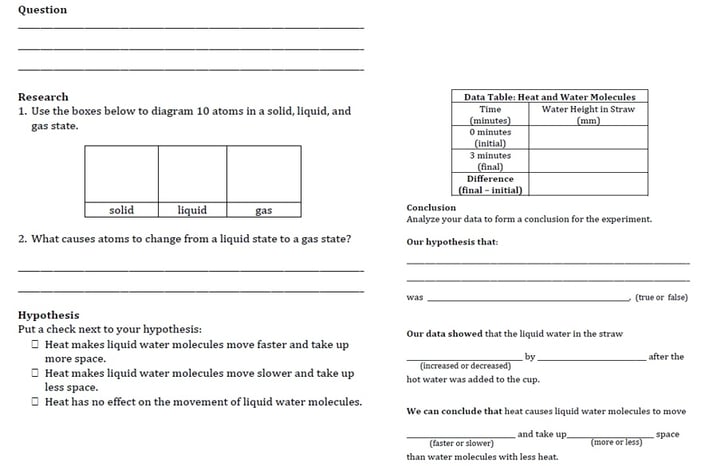 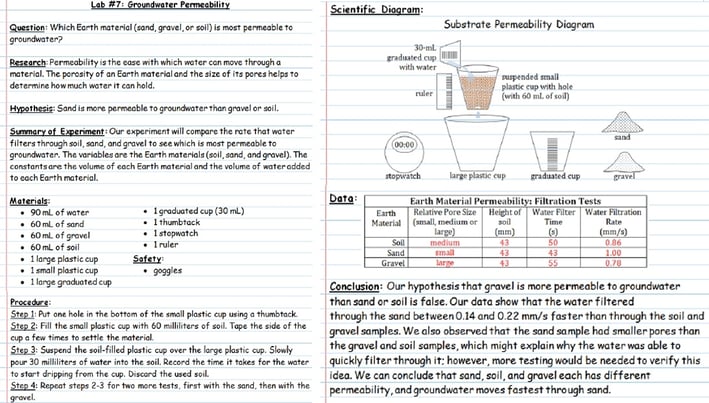 Planning an investigation, beginning with asking an original question and forming a hypothesis based on it, must be wholly up to the students. While teachers can give guidance, they must allow students to act as scientists and engineers in their own way. The above investigations demonstrate the growth in thinking and independence from 2nd to 7th grade, but nevertheless display that in order to get to a place of CER mastery, they must eventually be able to carry out the entire process themselves, fully engaging in the practices.

One of the places in which teachers mistakenly go off the rails at this point is in failing to let students plan their own investigations. They put a canned demonstration in front of students and control the investigation process, rather than making the topic open-ended and allowing students to ask a question and design the experiment themselves. If we are to place a high value on evidence, then that evidence must be meaningful to students, and that is much more likely if they establish a question they would like to pursue themselves.

Giving students a starting point for asking their question is important. They must have a knowledge base—in the form of nonfiction reading and Socratic dialogue—on which to base their question, hypothesis and investigation.

Of course, that doesn't mean we simply toss students into an investigation without preparing them beforehand. Nonfiction reading offers students a basic set of facts that inform their understanding of a subject, and Socratic dialogue deepens it by helping them tie concepts together and relate their new knowledge to the science and engineering practices they will rely on in order to conduct their experiments.

We are not criticizing teachers who do that, because at this point in time, many don't know any better. This is simply how teachers are taught to teach science. In fact, people who are engaged in any of the practices or processes are already frontrunners, because there are a lot of teachers who don't engage students in any practices or processes at all. It is important that as a profession we move to rigorously challenging students and engaging them in the practices and processes from a young age, continuing to build on them each month throughout the school year and each year throughout their education. You can see how, if we are to establish the claim-evidence-reasoning model as an integral part of STEM teaching and student thinking, the textbook model simply doesn't fit.

The explanation, as guided by the CER, is the culminating point of any scientific or engineering process. By using a robust CER model, students can form excellent conclusions that help them engage more fully in the iterative nature of science and engineering.