Carl is a high school graduate whose hard work and creativity allowed him to grade skip and graduate early. In this guest blog post, Carl shares his perspective on what it was like to be a student in typical suburban K-12 science and math classes. 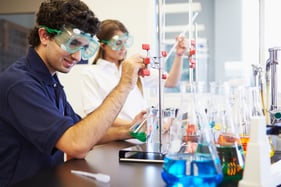 When I was in elementary school, most of the students in my class didn’t enjoy math. At that age, I was rarely different, but occasionally something would spark my interest, making me want to put real effort into finding a solution to a problem. Looking back, I realize that the type of problems that truly motivated me were the ones that joined creativity and logic, even within highly structured subjects such as math and science.

But often creativity doesn’t seem welcome in math and science classrooms, where students are instead asked to focus on memorization and repetition. It’s hard to interest students this way because they can’t see the relevance of STEM. Students are more engaged when creativity is central in their learning.

Creativity plays a crucial part in the STEM subjects, and giving it its proper role is an essential, yet often overlooked, way that teachers can inspire students. Learning is much more exciting when it becomes a personal investigation. Students should understand how to use the tools they have learned in math and science to make their own discoveries. This is the true power of STEM education: when students develop the creative skills to identify problems, ask questions, and persevere toward a viable solution, they become true innovators. The world is dominated by people who have taken what they have learned and used it to make something new, and students should be encouraged to do the same. That is how to best prepare them to succeed.

My third-grade math teacher once asked my class to add all the numbers from 1 to 100. He didn’t tell us how to do it, and let us figure out the solution on our own with the tools we already knew. This sort of freedom was new to me, and I eagerly played around with the numbers searching for a shortcut to the answer. I eventually realized that certain pairs of numbers between 1 and 100 (1 and 100, 2 and 99, 3 and 98, etc.) all added up to 101. By multiplying 101 by the number of pairs (50), I got the answer: 5050. Because I had been given the opportunity to experiment and exercise my creativity, I became enthusiastic in solving the problem, and I expanded my understanding of math on my own.

Is the Point of STEM to Consume Facts or Create Change?

As my third-grade example illustrates, there shouldn’t be a division between creative and logical tasks. Innovation requires both creativity and logic. The creativity of innovators allows them to push boundaries and find new solutions. Unfortunately, in my experience, students are often taught only the logical part of many subjects. When working on STEM projects, I sometimes got the impression that there wasn’t room for creativity within the requirements of the project.

This mindset can be unintentionally encouraged by teachers. Let me give an example. In sixth grade, I was working on a project where I had to draw interconnected lines in a rectangular area to form various polygons. The assignment was to label the names of the different polygons I drew. I wanted to exceed the requirements of the project, so I included an eleven-sided polygon in my drawing, as opposed to the 3- to 10-sided polygons that we had learned. When I went to the teacher to ask what the name of the shape was (it’s a hendecagon), I was excited to have done something original with the math of the project, but the teacher seemed more interested in other students’ unique decorations. Inadvertently, the teacher had given me the impression that innovation in the decoration of a project was more important than innovation in the substance.

Creativity Is the Key to STEM Innovation

My experiences since elementary and middle school have led me to believe that creativity should be encouraged even when dealing with logical, structured subjects, because creativity is the basis for real STEM innovation. When I got to high school, I realized how useful a creative mindset could be. Students were given the responsibility to make projects original and engaging, and I found that subjects I had come to associate with straightforward logic—math and science—had important creative aspects to them. I joined the math and science teams, where creative problem solving was essential when, for example, we had to measure weight with a floating scale or solve 20052 - 19952 by hand within a time constraint.

I want to design things that shape the world, and now recognize the importance of creativity in achieving that goal. Because I enjoyed using the skills I had learned in math and science to solve problems, I decided several months ago to go to the Cornell University College of Engineering. I expect creative problem solving to be central in many of my college classes and hope that teachers everywhere will recognize its importance in K-12 classes as well.