Science and engineering practices are not merely a set of skills, they are an intentional effort to combine both skills and knowledge in a contextualized classroom that allows students to engage with this material on a level that encourages their higher-order thinking skills. In fact, the goal of the Next Generation Science Standards is to reorder the priorities of thinking in the classroom, in some sense. 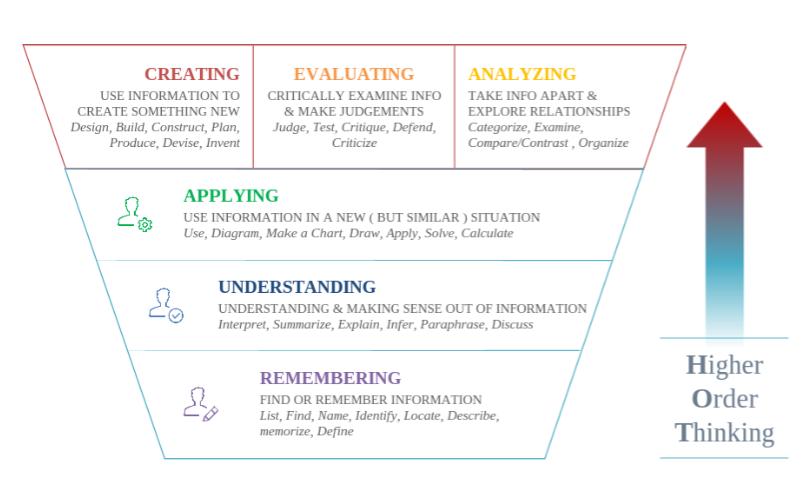 The traditional graphic is a pyramid, with Remembering at the bottom, progressing upward through Understanding, Applying, Analyzing, Evaluating and Creating. Here, however, we can see that a rearrangement has taken place, such that students are creating, evaluating and analyzing in concert, while relying on their skills of application, understanding and remembering.

This type of thinking can substantially increase students’ abilities to engage with material meaningfully, in ways that are reflected in testing, and we have concrete reasons to put great faith in this approach. We've seen countless times that by using the Next Generation Science Standards, and by engaging in a next generation inquiry environment, students produce major gains over time.

This holds true even in really tough urban environments where students are 93% low-income and 85% free lunch. We’ve seen evidence for this again and again, with the number of students who need improvement or are in a warning state steadily dropping, and the number who are advanced and proficient climbing steadily, and relatively rapidly.

Across the board, the NGSS encourage student growth.

The number of students considered proficient or advanced steadily climbs in public schools within districts that adopt these standards, while the number that need remediation or at risk of failing drops. We have seen these results again and again, throughout various schools and districts, even in cases where the school was predominantly low-income.

This on-the-ground data is powerful, and as new practices become embedded in curriculum, the gains just climb higher.

A lot of the benefits have to do with that higher-order thinking. This tends to hold true throughout a variety of different population types as well. It’s true across grade levels, it’s true when students are high-needs or have disabilities, true when they’re still learning English and so on.

Looking forward, the next generation of assessments is likely to be able to yield the same type of data. Which would be great news, and is a trend we can most likely keep up and spread to other schools and districts if we can encourage widespread, meaningful adoption of these standards in the classroom. One of the primary ways we can encourage this growth is by making practices themselves standard in the classroom. Let’s take a closer look at what that means.

These eight science and engineering practices are laid out by the National Research Council’s framework.

The science and engineering practices are as follows:

These practices, like the Carnegie Corporation’s report, come directly from scientists and engineers. They come from companies that rely on innovation, that produce innovation, whose workers were crying out for a difference in the way science and engineering are taught in this country.

Note that these companies did not specifically say, "We need new standards." Rather, they said, "We need people we can employ. We need kids who are ready to take on science and engineering degrees. It's not happening. Why?" In a sense, the practitioners in these fields provide an umbrella of supervision over the whole process, which can be very beneficial in the case of STEM education.

If we consider math and ELA CCSS, we can see why: There is no such umbrella over these standards, provided by top-selling authors, journalists and mathematicians, and as such there is less emphasis on actually creating standards that mimic what those students will one day need to be successful in later life. That’s not the case with the NGSS, and that’s a good thing.

The rollout of the Common Core, rather than being overseen by actual professional organizations or stake-holders, was instead a very political process. That fact made itself known in development and rollout. That’s why we see so many different languages and forms of implementation.

When you look at the website for the Next Generation Science Standards, on the other hand, you see very different language and a very different picture.

Overall, there are 40 states and territories that have expressed strong interest in adopting these standards, and 26 states were involved in their development. They want to get behind something that's much more true to the spirit of science and engineering, and avoid the tense language found on the Common Core website. Quality shines through when you look at this site, a prime example of education based on standards that are rich in context and practice. It is very factual. It's not emotionally charged.

Both the involvement of the major players in science and engineering, as well as the lessons learned from the communication failures of math and ELA CCSS lent a hand to ensure that these standards really reflected the innovation behind them and behind their backers.

It’s when people want to create innovative science and engineering standards and they don't involve innovators – or develop standards that aren’t really pushed by innovators – that we're in trouble.