Massachusetts Adopts Next Generation of Science, Technology, and Engineering Standards for K-12

On January 26th, 2016, while most educators were hard at work in their classrooms, the Massachusetts Board of Elementary and Secondary Education met at Roxbury Community College to vote on a resolution to adopt a new set of K-12 science standards. The proposed standards, a very close reflection of the Next Generation Science Standards, are taking the place of the 2006 Massachusetts Curriculum Frameworks for Science, Technology, and Engineering. 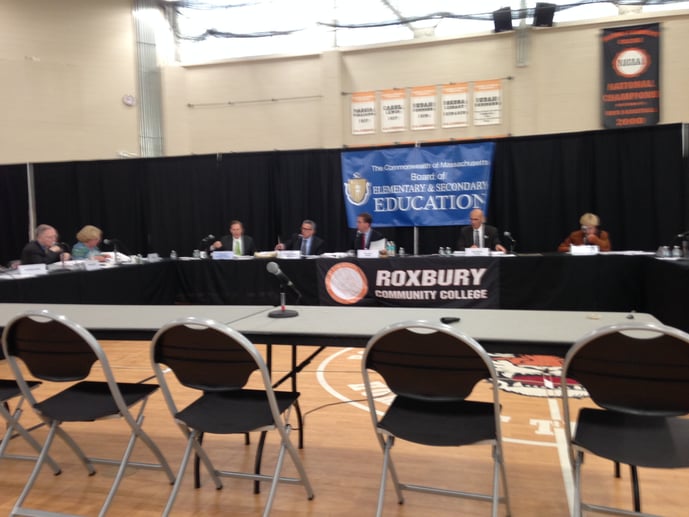 KnowAtom's CEO Francis Vigeant, addressed the board about key changes in the proposed standards that would help carry Massachusetts' teaching and learning into the 21st century:

" [The proposed] innovation is simple: When a child is challenged to think critically, developing and using content in their classroom, as scientists and engineers, they are developing creative, evaluative, and analytical thinking skills that are useful for any career which justifies and legitimizes science and engineering as a K-12 subject for all students.

Conceptually this innovation has been a tough sell in Massachusetts because the 2006 science, technology, and engineering standards are focused on teaching about the disciplines but lack an explicit, standards-based requirement to intentionally nurture and engage students in the practices of the disciplines with regularity.

In essence the current 2006 Massachusetts science standards are focused on the history of science and engineering knowledge. While history is important, the future of innovation relies on developing and using that knowledge to engineer solutions and answer questions through thoughtful experimentation and prototyping.

I'm here to encourage you to vote in favor of the resolution to adopt the proposed science, technology, and engineering standards as the next generation of K-12 science standards here in Massachusetts because the proposed inclusion of science and engineering practices means Massachusetts classrooms will begin teaching students the skills necessary to be scientists and engineers, building knowledge and skills to solve novel problems and answer unfamiliar questions.

We don't need 100% of our students to become PhD scientists and engineers. But we do need 100% of our students to be equipped to think critically, demonstrating the skills to create, evaluate, and analyze, because mastering these skills puts all students in charge of their future, breaks cycles of generational poverty, increases participation in our democracy, and would give Massachusetts the most trainable and productive workforce it has ever seen.

Pending the board's vote today, KnowAtom will be releasing a special, grade-level-specific curriculum fully aligned to the new 2016 Massachusetts science standards for our clients in Massachusetts, and available for all Massachusetts elementary and middle schools to implement this fall 2016-2017."

After testimony, the Massachusetts Board of Elementary and Secondary Education discussed the proposed resolution and voted to accept, ushering in a new era of focus on higher order thinking in Massachusetts' science, technology, and engineering standards.