Find out why Lawrence Public Schools has seen an uptick in the science performance among its English Learners. 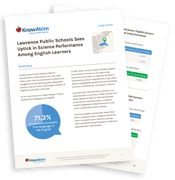 Since adopting KnowAtom’s next generation K-8 science and engineering curriculum and hands-on resources in 2015-16, Lawrence’s English Learners have moved from below average to above average performance on the state’s standardized science testing when compared to peer districts, placing them among the top performing English Learners in Massachusetts’ urban districts.

Read this case study to find out how Lawrence’s partnership with KnowAtom in approximately 400 classrooms spanning K-8 is helping to improve its students’ success in science.

Fill out the form on the right to download now.